The Dutch are known for their initiative in harnessing wind power to generate electricity. So, it should come as no surprise that a Dutch firm, NL Architects, is one of the first to come up with a radical idea to make this technology more viable and compact for use in an urban environment. The firm has developed what it calls ‘Power Flowers’, and these are, simply put, next generation windmills. They are remarkably compact and efficient, and may just be the urban answer developers of alternate energy sources have been looking for.

While large wind turbines generate plenty of electricity, the amount of infrastructure and land they take up, makes them inapplicable to urban environments. The Power Flowers, on the other hand, are economical in their use of land and infrastructure. A power flower consists of a narrow pole, about the same size as a streetlamp, and there are small, vertical axis power generating turbines branching out from the pole on either side. Imagine it as a tree adorned with a few large flowers. Each ‘tree’ consists of either 3 or 12 turbines.

Apart from their compact size and ease of installation near places where the electric power is actually needed, the Power Flowers offer other advantages. To begin with, they are virtually noiseless, and most importantly, it is not necessary to direct them into the wind. Thanks to their aesthetically pleasing design, they won’t be a street-side eyesore either. In fact, the designers believe that these next-gen windmills will blend into the urban environment just as easily as telephone towers, electric lines and streetlamps. The power flowers could also fit into someone’s personal backyard.

The Power Flower designers have an American firm to thank for developing these 4 KW turbines. Urban Green Energy, the developers, intended the use of these turbines on city rooftops. However, the rooftop turbines are only 1 KW generators, and cost $7,000 each. Sounds really expensive, but in the state of California, where a rebate is offered by the government, one could break even in roughly 10 years. This technology is already being used on the roof of the National Guard building in Ohio and atop virtually every house of a middle-class subdivision in St. Louis.

The CEO of Urband Green Energy, Nick Bitterswyk, is noticeably excited about the future prospects of wind-generated power, and NL Architects have just justified his optimism! 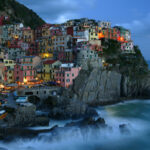