Much like most other great inventions and ideas, this one too was sparked out by sheer luck. A zealous marketing student interning for Adam Hainsworth stumbled upon a law passed by the British parliament in 1667 that stated that all corpses had to be buried in a woolen shroud. Hit by a brainwave that would go on to create an unstoppable wave among the carbon-footprint conscious community, he got down to building a prototype woolen casket reinforced with recycled cardboard. Several months later, Natural Legacy caskets – the first ever woolen coffins in the world – were unveiled by Hainsworth at a trade show organized in June 2009.

The 225-year-old wool mill, Hainsworth, is located in West Yorkshire and owned and run by a family. Known for the exclusive niche uses its wool is used for, such as in making the uniforms for the Royal Guards of the Buckingham Palace and the interior headlining for Bentley and Rolls-Royce automobiles – the Natural Legacy caskets are perhaps Hainsworth’s most unique product. It expects these caskets to become one of its biggest sellers very soon.

Among the admirers and supporters of these fluffy coffins is none other than Prince Charles’ who discovered this interesting product at the Campaign for Wool in January in 2010 – a national initiative that aims at reviving the British wool industry and protect the livelihood of sheep farmers in Britain.

In fact, so impressed was he by this new product that Hainsworth received a royal invitation to the ‘green’ garden party festival organized by Prince Charles at his Clarence House home last year. Prince Charles was even heard suggesting that miniature versions of this coffin could be used to bury the Queen’s precious corgis when they die. A fluffy send off for the furry companions of the Queens seems just about right.

Each casket is made from fleece of three sheep and is capable of holding up to 840 lb. It uses recycled cardboard for reinforcement while the interiors are lined with cotton. Since the emphasis on reducing carbon footprint, no dyes are used and therefore there are only two colors to choose from – brown and white. To add a more personal touch, each coffin is embroidered with a personal name plate – again constructed from wool.

According to the Natural Death Center located in Winchester, more and more people are converting to the concept of ‘eco-coffins’. While there are several other green options available to the general masses – wicker, papier-mâché, and cardboard – woolen coffins seem to have grown in popularity a lot faster than any of them. The cozy and sophisticated feel of these coffins have won people over and they don’t mind shelling out extra money for it.

Retail prices for these woolen coffins vary between $960 and $1,290, a steep difference from the average price of $800 for a regular wooden casket. But surely, it’s a small price to pay for carrying on a green initiative even when you are not physically in this world. I feel, that’s almost poetic in nature. 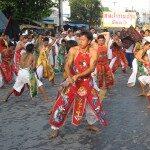