Your baby’s just turned one and you are about to introduce him to his very first milestones in child development. Too long has he driven in a rear facing position; now it’s time for him to enjoy the journey face forward! That has to be a lot more exciting than looking at the back of a seat. Several new sights are waiting for him down the road. Yay! It’s your baby’s first birthday and you are to going to turn him around to the forward facing position. A giant leap for toddler-kind indeed!

Not so fast, parents! In case you didn’t know the American Academy of Pediatrics (AAP) has issued new recommendations concerning car-seat guidelines for your baby. According to them it’s a lot safer if your baby remained seated rear-facing until 2 years. Looks like you’ll have to postpone the celebrations by another year.

The last time the AAP policy was updated was in 2002, at which time it was recommended to keep the baby in a rear facing position until he was at least a year old and weighed 20 pounds. However, new research shows that it is best to wait until your baby is at least two years old before turning him around.

Statistics reveal that car accidents cause the maximum deaths in children over 4 years and more than 1,500 children under 16 lose their life in car crashes every year. According to a study published in the journal ‘Injury Prevention’ in 2007, it was that found that children under 2 years were 75% less likely to sustain severe injuries or lose their life, if they were seated in a rear-facing position.

If you look at the body structure of a kid you notice that they have unusually large and heavy heads and their necks are built differently too. During an accident, if a child is seated rear facing he escapes with relatively fewer injuries. These seats are specially designed to offer better support to the child’s neck, spine, and head in the event of an accident or car crash.

While the reasoning is sound, there are going to be some strong objections to the new AAP guidelines. And it won’t be the parents who will be raising hue and cry but the toddlers themselves. If you’ve already turned your kid face forward, you will have a mighty task on your hand turning them back again. You can expect a lot of crying and tantrums. It’s not going to be a pretty picture, but you can console yourself in that it’s for their own good – a fact they’ll come to appreciate once they’re wrestling with their own babies, several decades later. 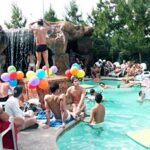