Beautiful Paris, gorgeous Paris, romantic Paris, chic Paris, sophisticated Paris…..and standing in the heart of the pretty-as-a-picture-postcard Paris is the Eiffel Tower. The Eiffel Tower (pronounced “ee-fell”) is a lot more than just a popular architectural structure that has become one of the most visited places in the whole world. It tells a story of survival against odds, of grit and determination, and, above all, ambition.

It is hard to believe that the tower that has become an icon of an entire nation, nay a whole continent, was, upon completion, reviled, protested against and quite hated. There were widespread demonstrations that spread like wildfire throughout France and a statement of protest was signed by various well known Parisians, including the famous satirist Guy de Maupassant. Most people were of the opinion that the structure was not just intrusive but also downright ugly.

It all began in the late 19th century, when the French were looking to commemorate the hundred-year anniversary of the French Revolution by building something spectacular. They wished to complete the project by the Centennial Exposition of 1889. Of the hundreds of proposals and plans that were submitted, Gustave Eiffel’s (1832-1923) was the best. He’d gained popularity for constructing the ‘guts’ of the Statue of Liberty and he had the expertise to make really tall and stable structures.

Construction began in full swing in 1886 in which 18,000 sheets of steel and 2,500,000 rivets were used. It took 2 years, 2 months, and 5 days to complete the tower, at which time it was the tallest structure in the world. The cost of construction amounted to what would be 50 million in today’s dollars, at which rate it would be a steal since it’s impossible to make something similar at these prices now. The tower was opened to the public on March 31, 1889. On this day, Gustave Eiffel climbed all the 1,710 steps to plant the French flag right at the top.

The sad news for Gustave Eiffel was that the Tower was slated to be destroyed after 20 years. Determined to not let that happen Gustave went about making sure the tower would continue to exist even after the exposition. He finally managed to prevent the dismantling of the tower by suggesting that it be used as an observatory and a laboratory. In fact, Gustave himself built an office on the third floor from where he studied meteorology, physiology, and astronomy.

In 1909 a permanent radio center was built under the tower and in 1925, the Eiffel Tower was used as a base for some of the first experiments in television broadcasting. From 1957 it began to be used as a transmission tower for both FM radio and television. The Eiffel Tower also helped Wulf discover cosmic rays in 1910, who used the Tower for his experiments and research.

By the time the twenty year period was drawing to an end, the Tower has become too popular a tourist attraction for the French to consider tearing it down. And so it remains till today, a symbol of one man’s determination to keep his legacy alive! 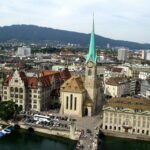