Back in 1911, the several-times-multimillionaire Frank Winfield Woolworth of the five-and-dime store fame took it into his head to build massive residential units for each of his three daughters. The architect commissioned for this mammoth project was C.P.H. Gilbert who, needless to say, did complete justice to it won Mr. Woolworth’s appreciation, and earned every single penny that came his way.

Of the three mansions, the one in the middle belonged to Helena Woolworth. It was designed after the style of a French Gothic house, complete with a limestone façade, 14-foot tall gilded ceilings in the parlor, ballroom-sized staircase, a dining room capable of seating 50 people, and a paneled library. The mansion is 35-foot-wide and sprawls over 18,000 square feet of space.

This beautifully designed building was bought by the epitome of health and fitness Lucille Roberts in 1995. Obviously her chain of ladies’ health clubs around the country was doing very well and she was able to buy this property for $ 6 million – a mere pittance compared to its current asking price. She died in 2003 and the property has been placed in the market for a heart-stopping $90 million.

The listing is being looked after by Paula Del Nunzio of Brown Harris Stevens. This mansion has 7 floors, all of which are accessible by an elevator. You can’t expect the rich and famous to run up and down stairs like a bunch of giggly schoolgirls, do you? There are ten bedrooms, eleven-and-a-half bathrooms, 8 fireplaces, and three kitchens. The house staff can be accommodated on the top floor that has two bedrooms, two bathrooms and a full kitchen as well.

The master suite is located on the fourth floor and is big enough to accommodate two New York City apartments in it. Everything comes in twos – two gigantic-sized bedrooms, two dressing rooms, two bathrooms, and two sitting rooms. I don’t know about you, but I find the idea of a couple’s room having everything in doubles a bit disconcerting. Why two bedrooms, for Pete’s sake? But then, how else would you be able to do justice to the term ‘architectural grandiosity’?

If you want a taste of the lifestyle of the rich and privileged you could rent the Woolworth mansion too – for just $210,000 per month. Get yourself one of those pills to steady your nerves. You read right – the rent is $210,000 per month – no more and no less! I envy anybody who has that kind of money to blow up – that too on rent. Now, that’s what you call living life king size! 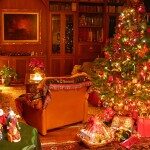